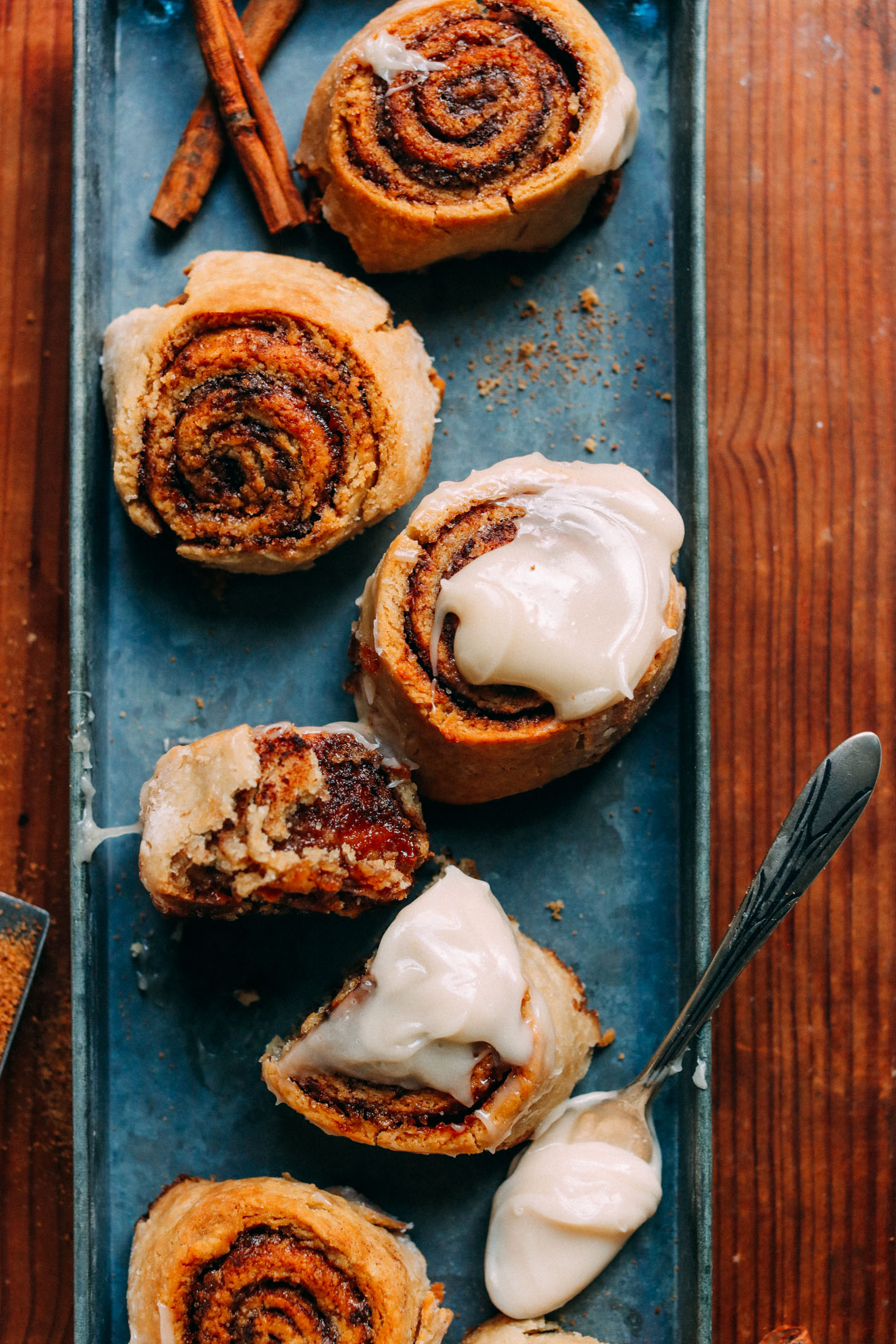 They’re like the unicorn of the gluten-free, vegan baking world. Many have attempted, few have succeeded. Yet I knew they existed and were possible if I just believed (and tried and tried again and again). 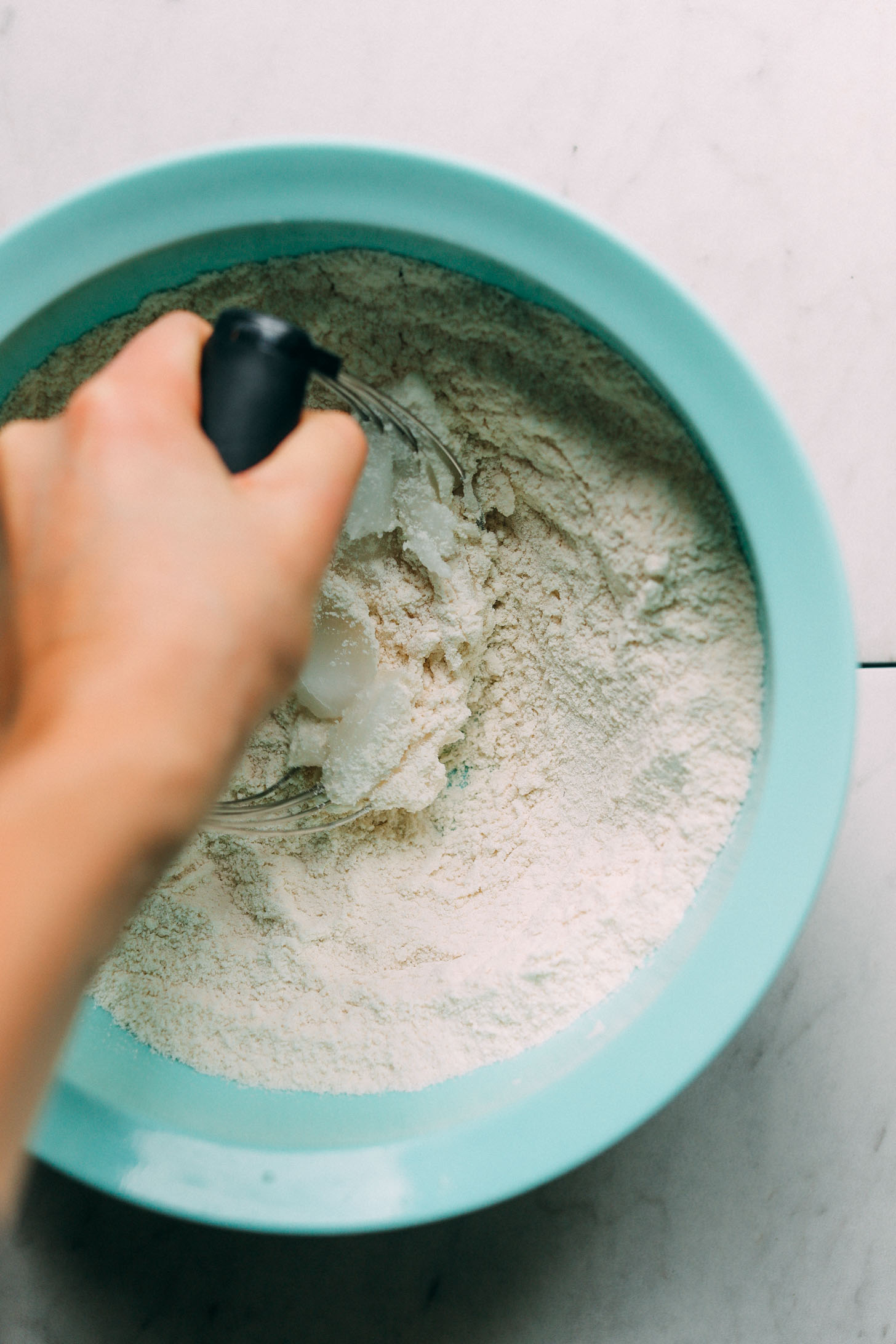 These cinnamon rolls are surprisingly easy to make. They require just 10 ingredients you likely have on hand right now (!!) and come together using simple methods.

If you’ve ever been intimidated by yeast in baking, don’t be! I include my favorite yeast below, and as long as you don’t overheat your almond milk, you’re golden. It should activate right away and help your rolls rise to the heavens. 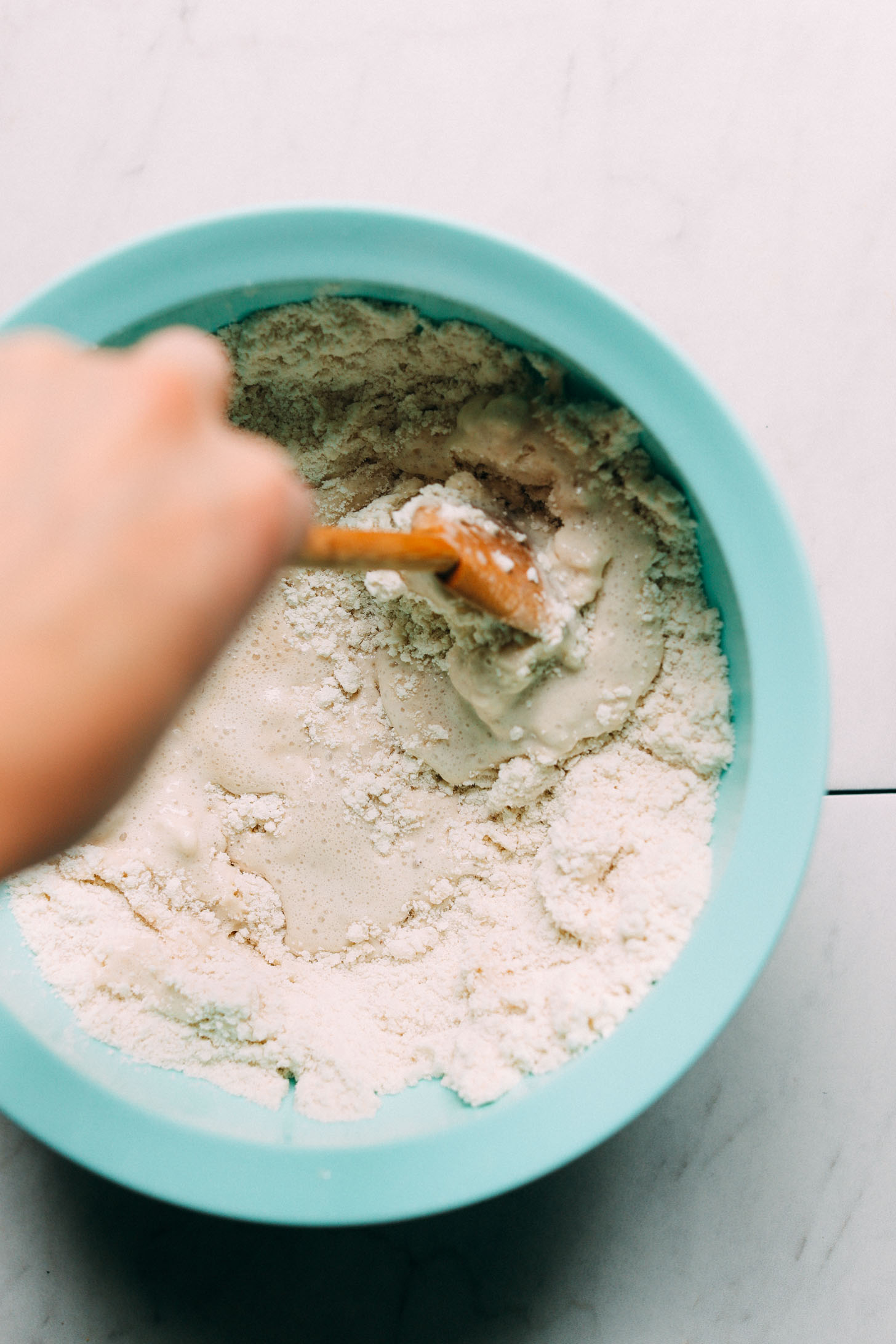 The cinnamon roll dough is kept light and fluffy with a blend of gluten-free flour and almond flour.

Coconut oil (or vegan butter) adds flakiness to the exterior and moisture to the interior, creating that perfect tender-on-the-inside, flaky-on-the-outside cinnamon roll. YUM. 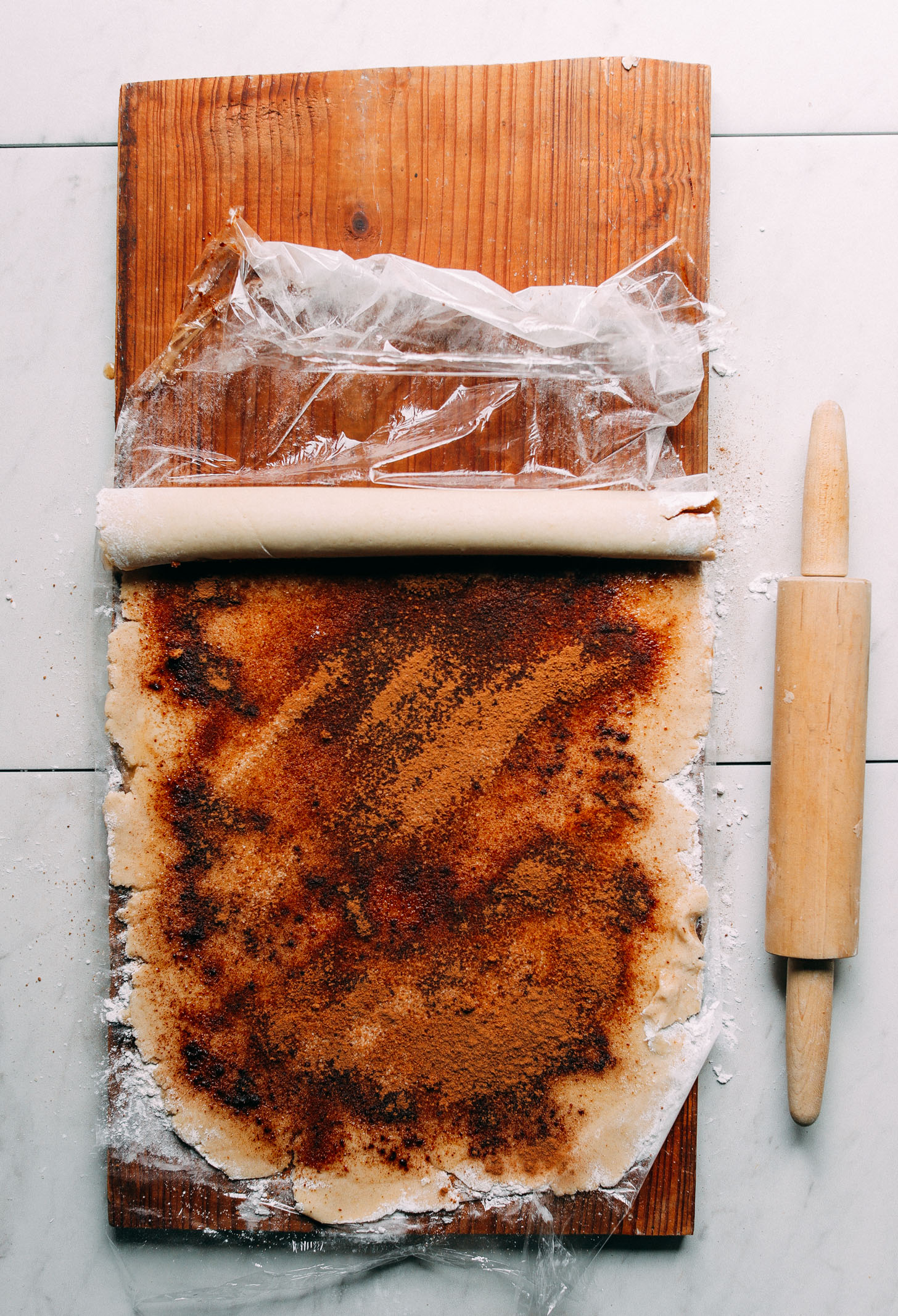 The one part that looks intimidating (but totally isn’t) is the rolling-out process.

Simply line a cutting board with plastic wrap, dust with gluten-free flour, and plop your dough down. Then top with more plastic wrap and roll into a thin rectangle. And voila! You have a perfect cylinder for cutting your rolls. See? I told you we could do it. 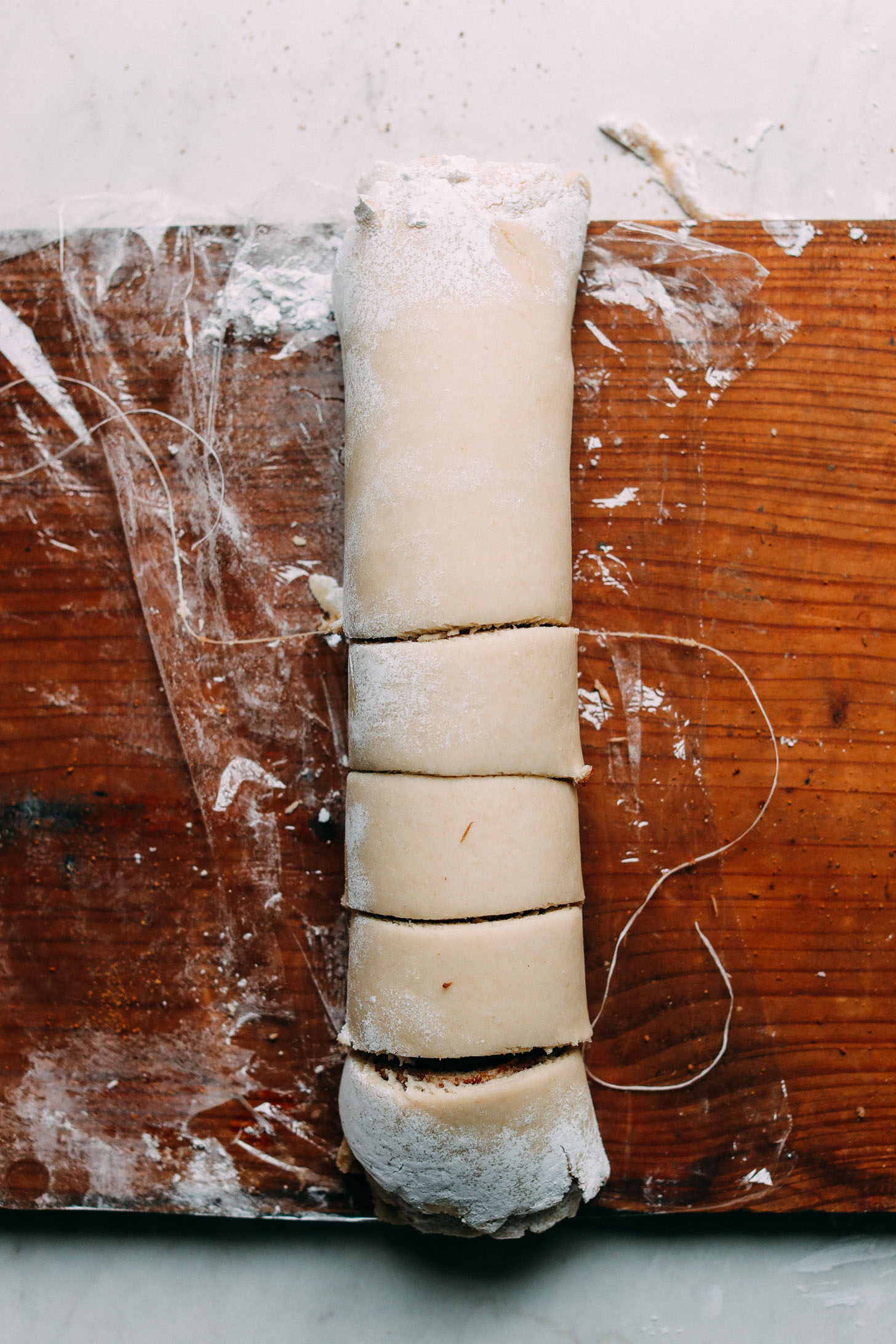 Next is a short rise on a warm oven so the dough can expand. Once the rolls are almost touching, it’s time for a short bake in the oven.

We’re so close, friends. So close! 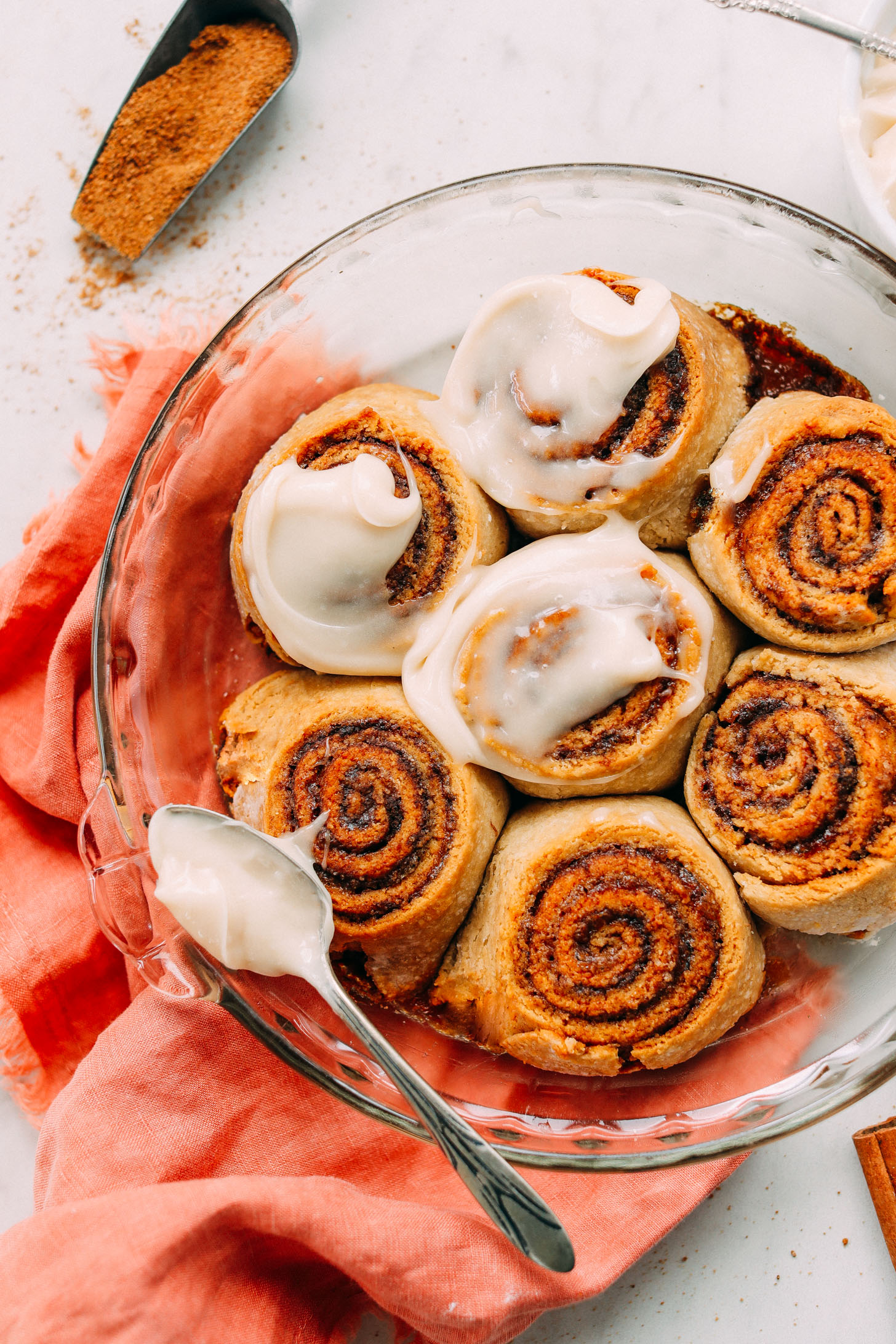 At this point, you can glaze or not glaze. But…glaze.

I include two frosting options below, but I highly recommend the cream cheese frosting. Something about it feels indulgent and pairs perfectly with the rolls. 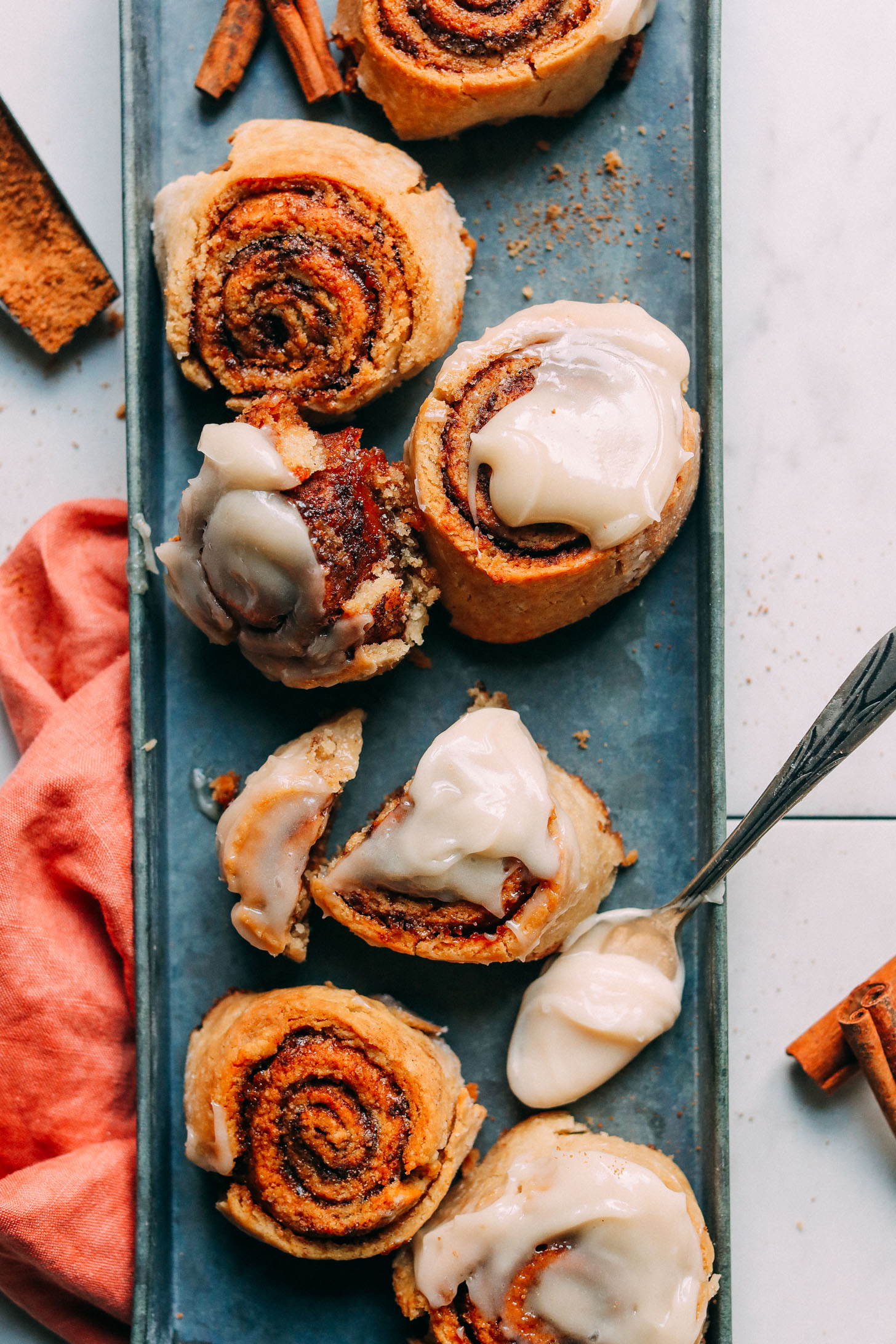 I hope you all LOVE these rolls! They’re:

Tender on the inside
Flaky on the outside
Cinnamon-spiked
Perfectly sweet
Easy to make
& Seriously delicious!

These would make the perfect lazy weekend breakfast or special occasion dessert (like the holidays!).

If you try this recipe, let us know! Leave a comment, rate it, and don’t forget to tag a photo #minimalistbaker on Instagram. Cheers and happy baking, friends! 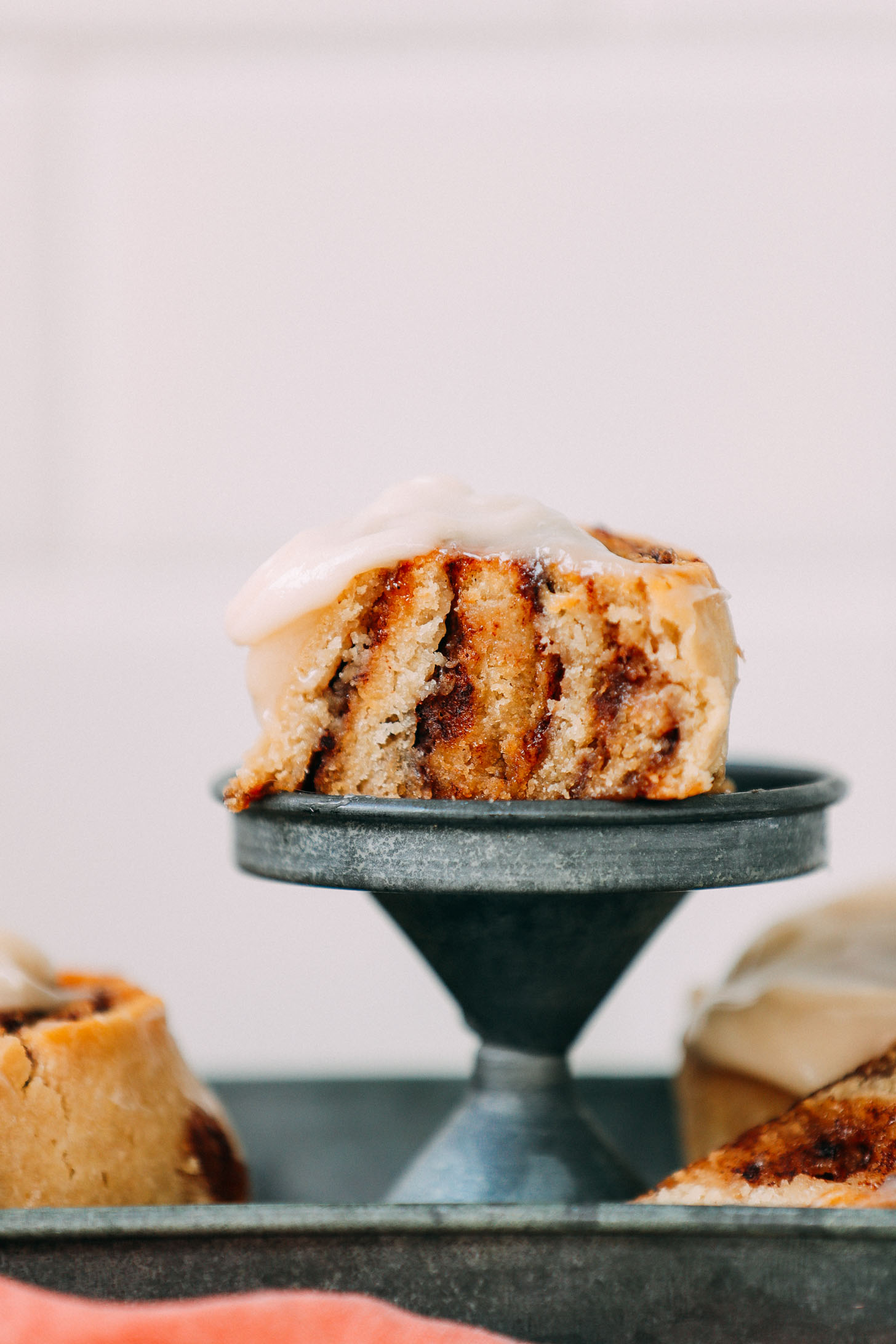 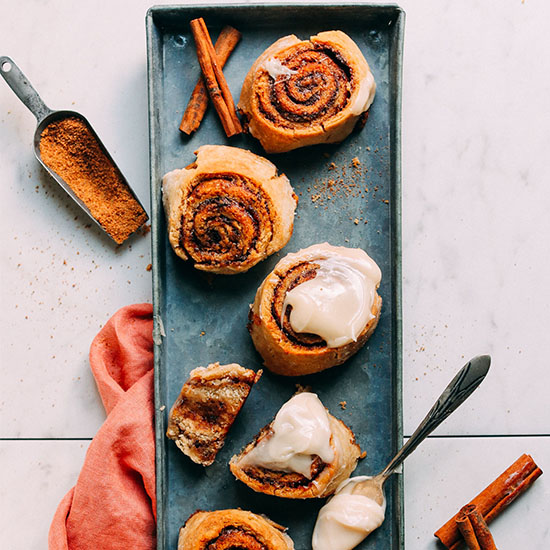 *To create a simple powdered sugar glaze, whisk 3 cups (300 g) sifted organic powdered sugar with 1-3 Tbsp (15-45 ml) dairy-free milk until smooth. To thicken, add more powdered sugar. To thin, add more dairy-free milk. Pour onto the rolls after cooling outside of the oven for 10 minutes.
*You can also make the dough ahead of time to the point of rolling and cutting the dough into rolls – at which point you would transfer them to a parchment-lined baking sheet, freeze, and then place in a freezer-safe bag or container and freeze up to 1 month. Then, when ready to bake, place in a prepare baking dish, cover, and set on top of the oven to thaw for 1 1/2-2 hours. Then heat the oven to 350 degrees F (176 C) and allow them to continue thawing / rising. Once they’ve thawed and visibly risen, bake for 25-30 minutes or until golden brown and expanded/risen. Glaze as instructed (optional).
*Nutrition information is a rough estimate for 1 roll (of 8) without glaze.
*Recipe and method loosely adapted from Recreating Happiness.