[This post is sponsored by McCormick. I can’t wait for you to see the deliciousness I’ve whipped up with some of their products in 2018!]

HELLO fondue, you make all my 80s dreams come true. 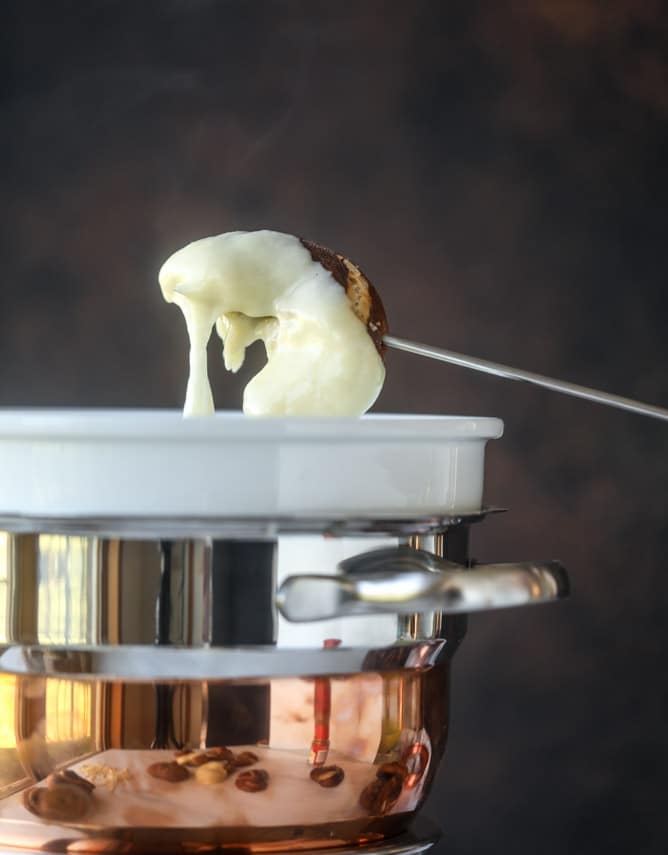 Irish fondue, to be exact. Today we’re talking about the appetizer that can be the hit of your Saint Patrick’s Day. Spiced stout pretzels. Dipped in a rich Irish cheddar fondue. I NEED NOTHING ELSE IN LIFE. 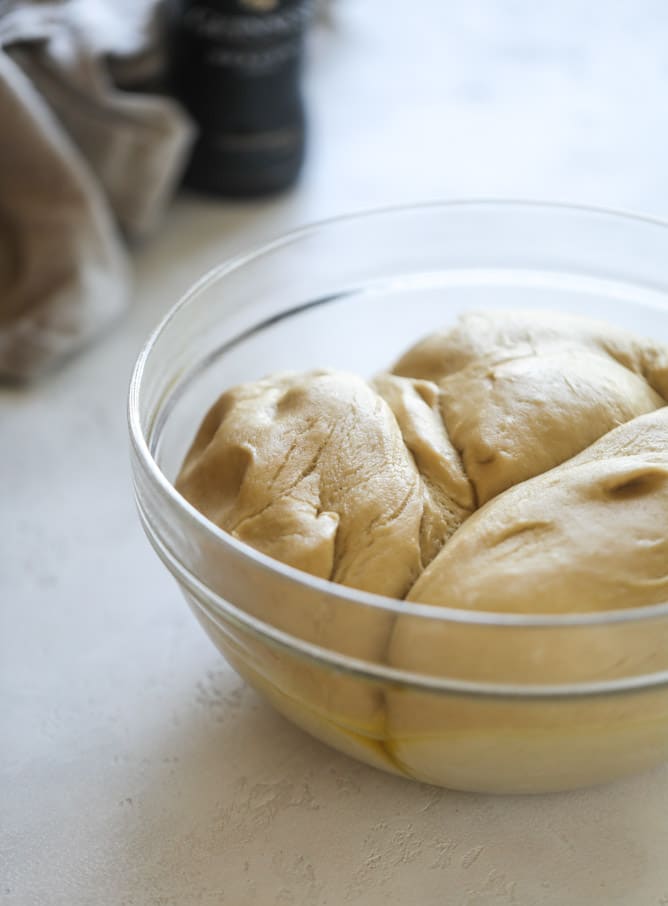 Saint Patrick’s Day is huuuuge here in Pittsburgh and especially this year, because the parade falls on the actual holiday. The parade is INSANE. Like truly, a crazy experience. To be real, it’s not an experience I have wished to have since leaving college, but if you haven’t witnessed all the green beer that you can find in the city, it’s worth one try.

The actual parade isn’t even what draws the biggest crowd… it’s just the huge party downtown surrounding the parade! 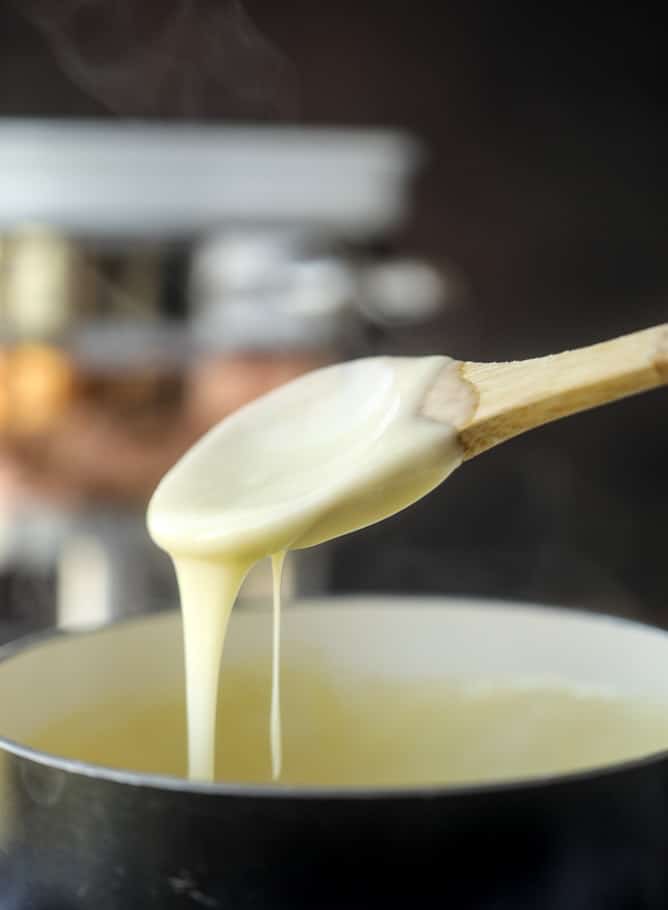 Some of the wildest memories I have from college include crazy parade day. Some of the worst too: one being when we decided to dye a handle of Banker’s Club vodka green (totally sick just thinking about it) and two, the time I was sure my brother was MIA when he wouldn’t answer his phone after the parade (see: he took a long green beer induced nap). The outside party/parade is super fun though, I swear! 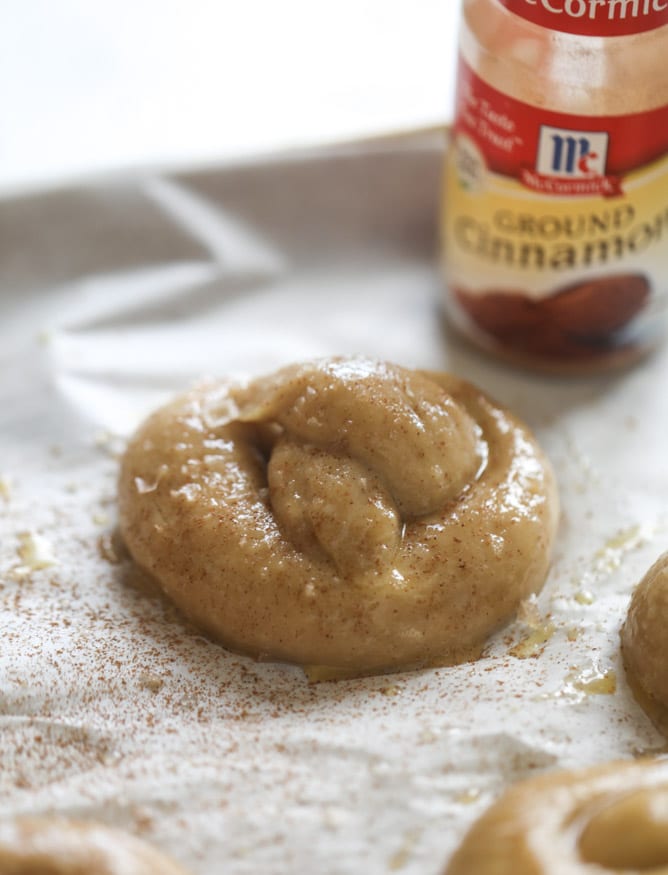 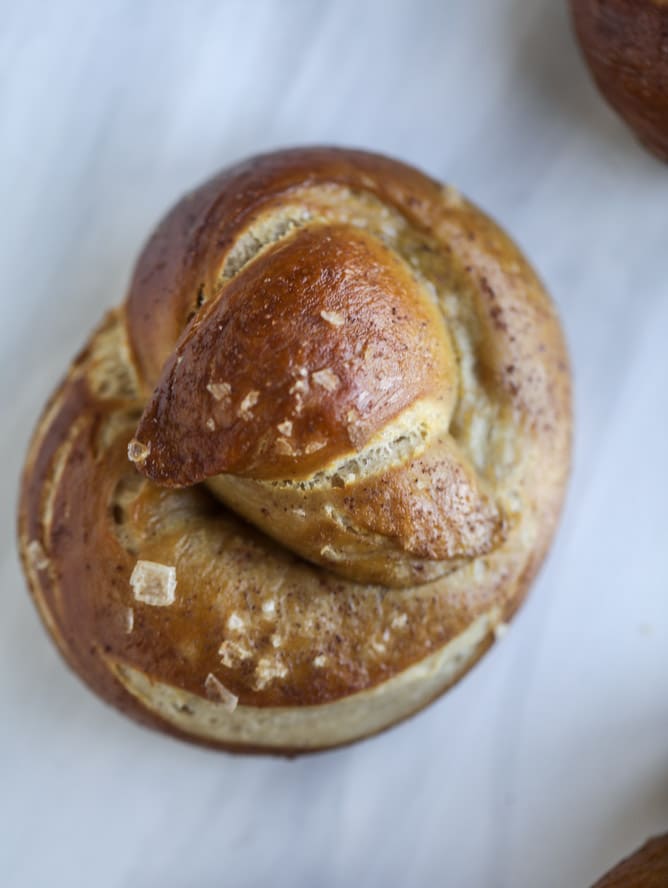 You won’t find me drinking Guinness on its own – it’s a little too heavy for my liking and I prefer something light and fruity or citrusy. Shocker. However, I love using it when it comes to cooking and baking!

These pretzels are extra special because they are spiced with McCormick Ground Cinnamon. Using cinnamon in a non-sweet way is an incredible touch. It gives you that whole “but what IS that vibe” in a good way after taking a taste. The first time I ever did this was in chicken marsala and I’ve been hooked ever since. It’s to die for. 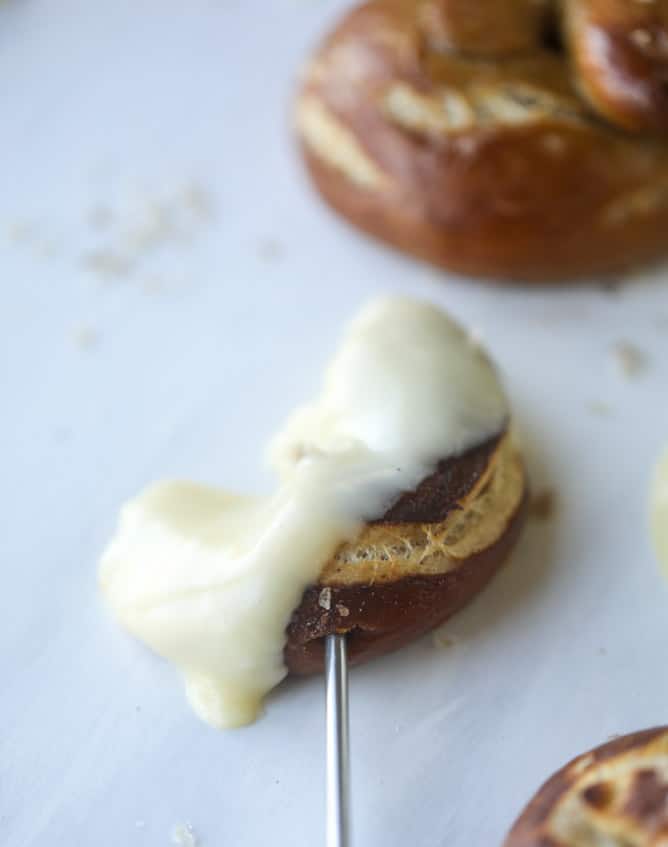 So. The cinnamon adds this little spiced punch to the soft pretzels, which are hearty and darker to begin with since we used the stout. To top it all off, I add a smoked sea salt on before baking and the flavor is fantastic.

But! It gets even more fantastic when we dunk it in an Irish cheddar fondue. Naturally. This is all Irish cheddar and wine (or more beer!) and it’s rich and decadent. You can (and should!) add some other dippers too… things like broccoli or cauliflower, roasted potatoes (if we want to keep this semi-Irish?), sliced apples and even a few pieces of steak. 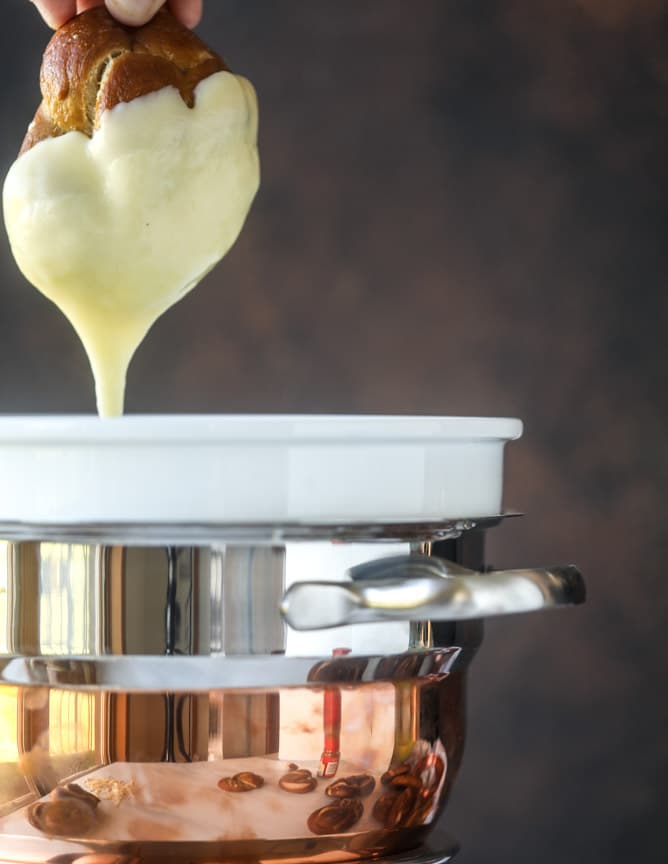 The best part about this fondue is that it is FOOLPROOF. There is no doubt that the cheese will melt and it will stay creamy when set over a flame in a fondue pot. With the occasional stir, it’s the perfect party treat!

While I’m all about this being the best snack ever, I’m definitely not above considering fondue to be an actual meal. Now only if I could get Eddie on board with that… 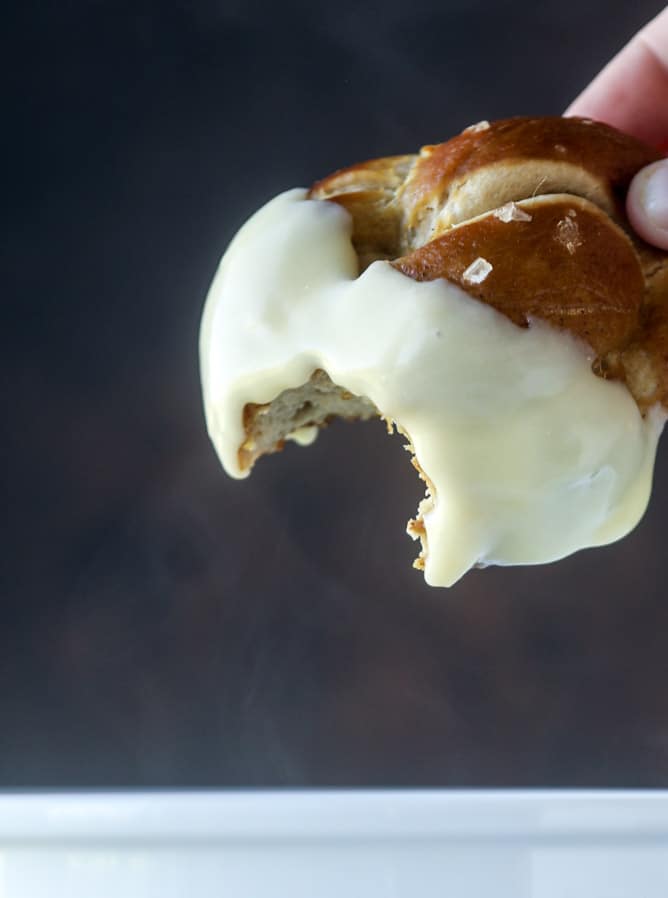 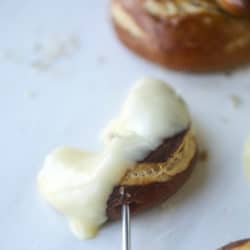 Place the beer in a saucepan and heat over medium-low heat until just warm.

In the bowl of your electric mixer fitted with a dough hook, stir together the warm beer, honey and yeast. Let it sit until foamy, about 5 to 10 minutes. Add in the flour, salt, cinnamon and melted butter. Mix on low speed until combined. Continue to knead the dough on low speed for 5 to 10 minutes. It should be silky and start to pull away from the sides of the bowl.

Take that bowl and remove the dough, run oil on the bowl – or spritz some oil on another bowl and place the dough in there. Place it in a warm spot to rise for an hour.

After an hour, take the dough and divide it into 16 equal pieces. Roll them out into ropes, about 12 inches long. Form the rope into a U-shape and then twist down the sides and pinch them into the dough to create a pretzel. Place the pretzels on a parchment-lined baking sheet.

Preheat the oven to 450 degrees F.

Bring the water and baking soda together in a large pot. Once it’s at a rolling boil, add the pretzels one at a time and boil for 30 seconds. Remove them with a flat spatula and place on the parchment about 2 inches apart. Repeat with remaining pretzels.

Whisk together the egg and water. Brush it on each pretzel and sprinkle the pretzels with smoked sea salt. Bake for 15 to 20 minutes, or until golden and set.

Heat a saucepan over medium heat and add the wine. You can also use Guinness here too if you’d like! Bring the mixture to a simmer. While it’s starting to simmer, toss the grated cheese with the cornstarch until it’s evenly dispersed. Reduce the heat to low and add the cheese in small handfuls, stirring after each addition. Continue to stir over low heat until all the cheese is melted. Stir in a pinch of nutmeg. Serve it immediately with the pretzels! 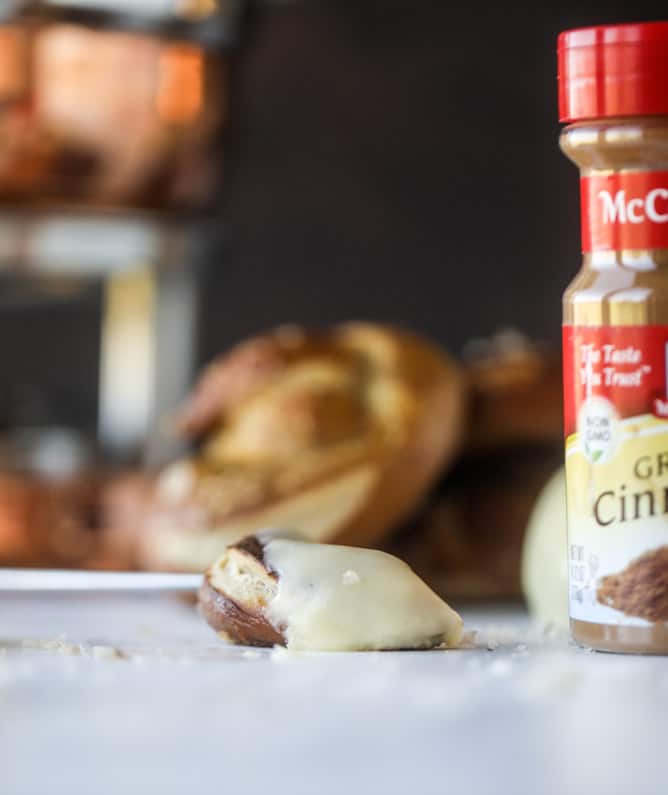 These also make great buns! And a perfect cheese sauce.