This is how we make the best fig focaccia bread! 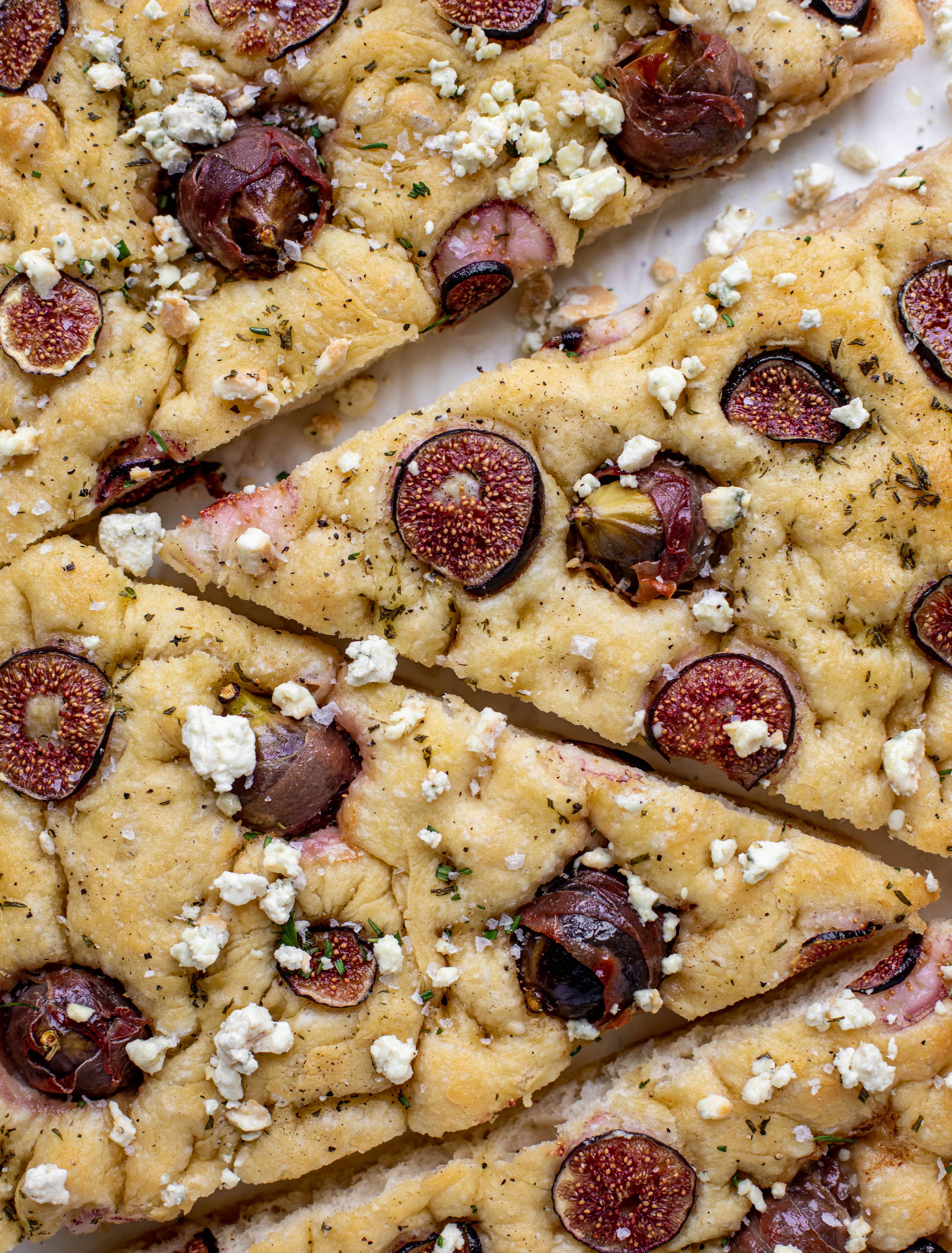 Remember earlier this year when I made that caramelized onion focaccia?! It’s one of my favorite recipes of this year because it’s JUST SO GOOD.

And I’ve been dying to make something else similar.

See? That’s what happens to me. It’s how so many of my recipes are born. I make something… and I love it. And I decide that because I love it so much, I should try to recreate it in another form.

Honestly, it barely works out. Usually the thing I make/do is never as good as the original that I love the most.

But! In this case?

WE HAVE A WINNER.

Figs on focaccia bread. If you’re a freak for alliteration like I am, enjoy.

Not only does this focaccia bread have tons of fresh rosemary and garlic and lots of sliced figs, it also has prosciutto wrapped blue cheese stuffed figs.

The prosciutto wrapped blue cheese stuffed figs aren’t a crazy phenomenon here. I’ve made a similar version before for my summer cheese plate (you still have time to make that happen, FYI!) and they are always a favorite appetizer when fig season rolls around.

But putting said prosciutto wrapped blue cheese stuffed figs ON something? Or IN something?

I mean, that’s a mouthful. Literally. 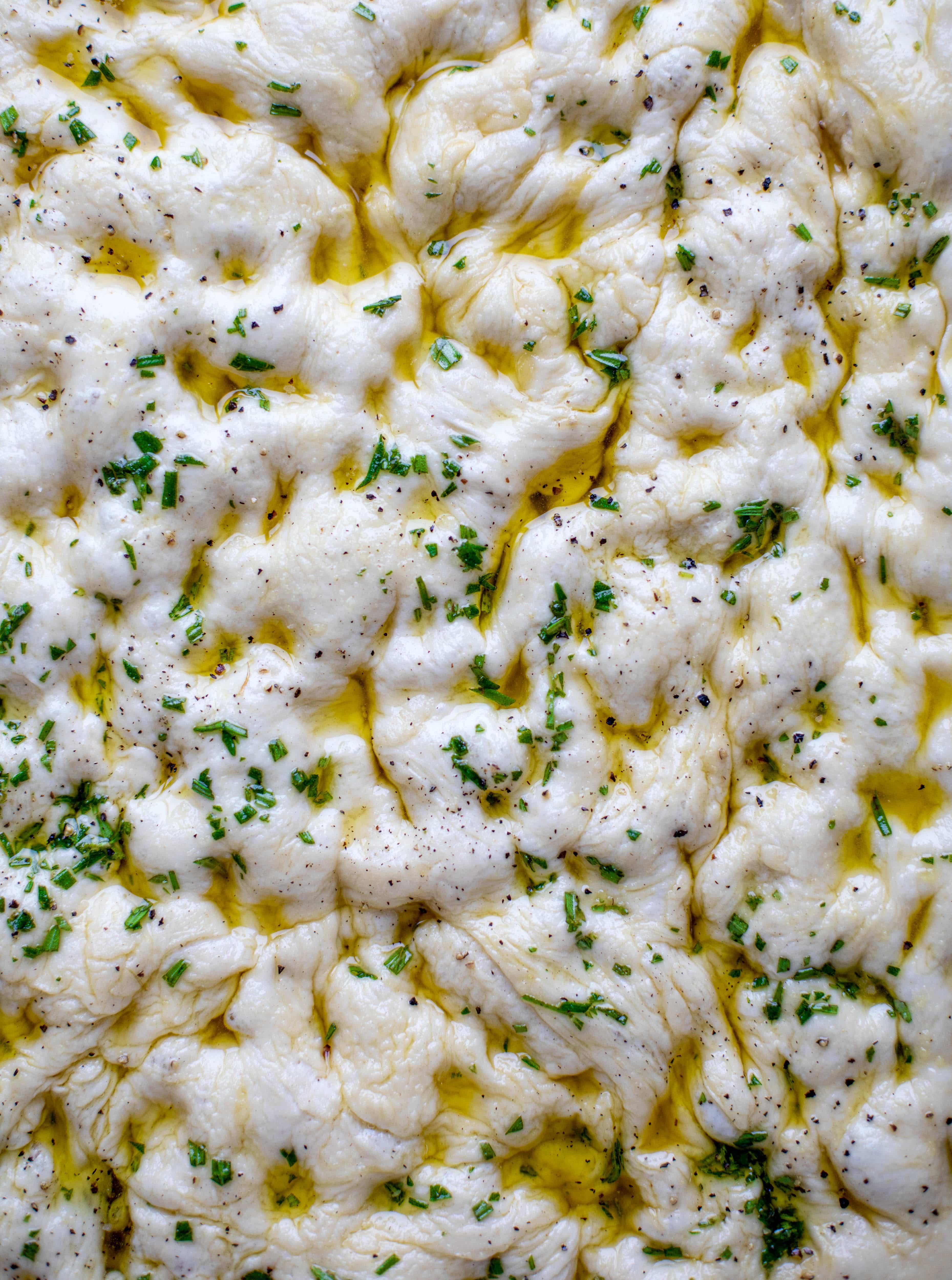 The key is to just make a few of the stuffed figs. Kind of “stud” your bread with the figs. That means that now, it’s prosciutto wrapped blue cheese stuffed fig studded focaccia.

Aren’t you so glad I didn’t name the entire recipe that above?

Once baked, the stuffed figs work their magic in the bread. The prosciutto that is exposed crisps up, as expected. The inside of the fig and blue cheese gets a little jammy, almost like you spread actual fig jam on the bread.

Speaking of that, you could totally spread fig jam on the bread if you wanted. I wouldn’t turn it down. 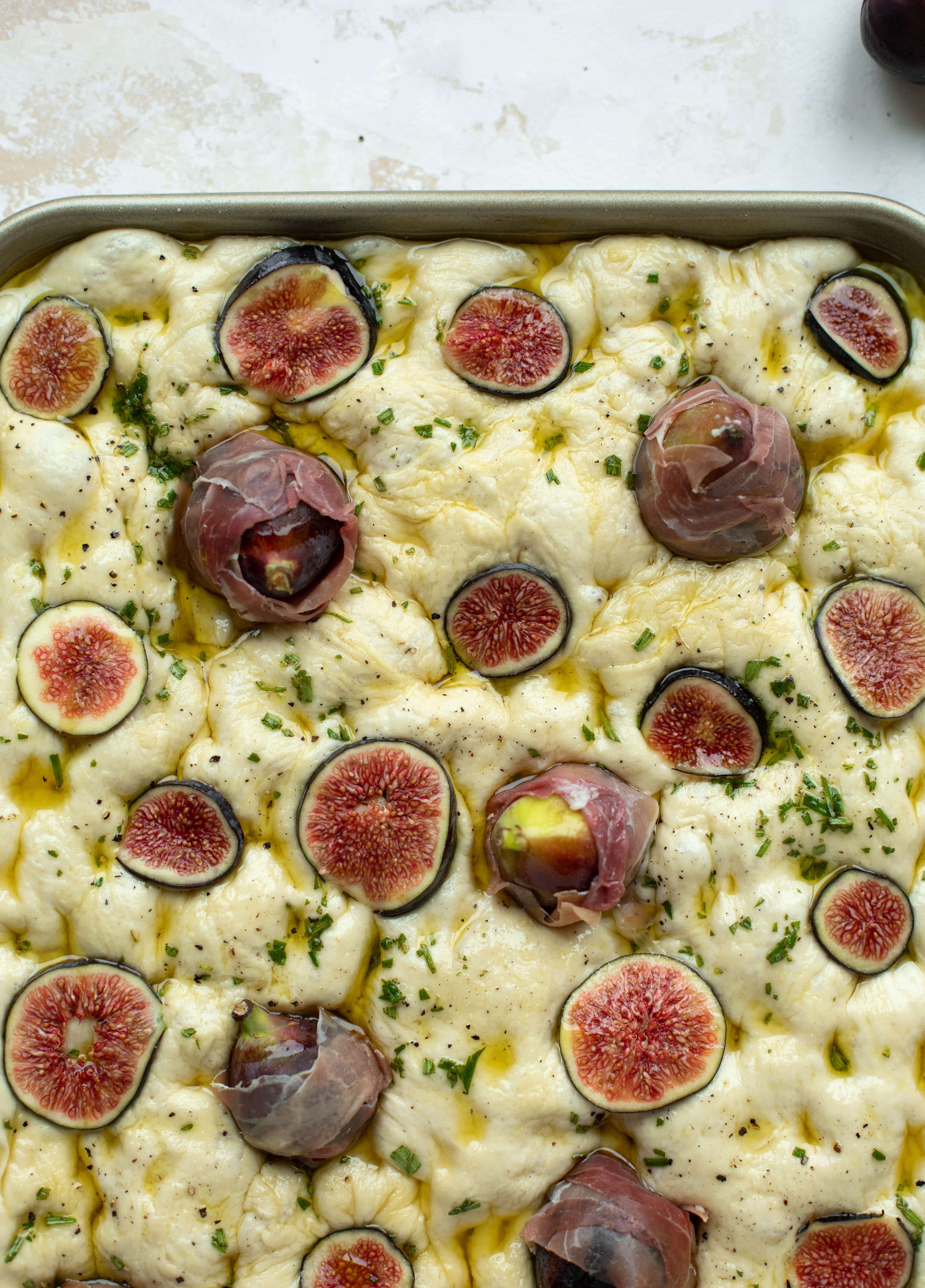 This is an appetizer. Or a pizza. Or a side dish. It’s actually whatever you want it to be. Where does it fit into your life?

For me, it fits right in with a late summer greens salad. So good.

For Eddie, it’s basically a starter to a larger meal. Shocking, right? 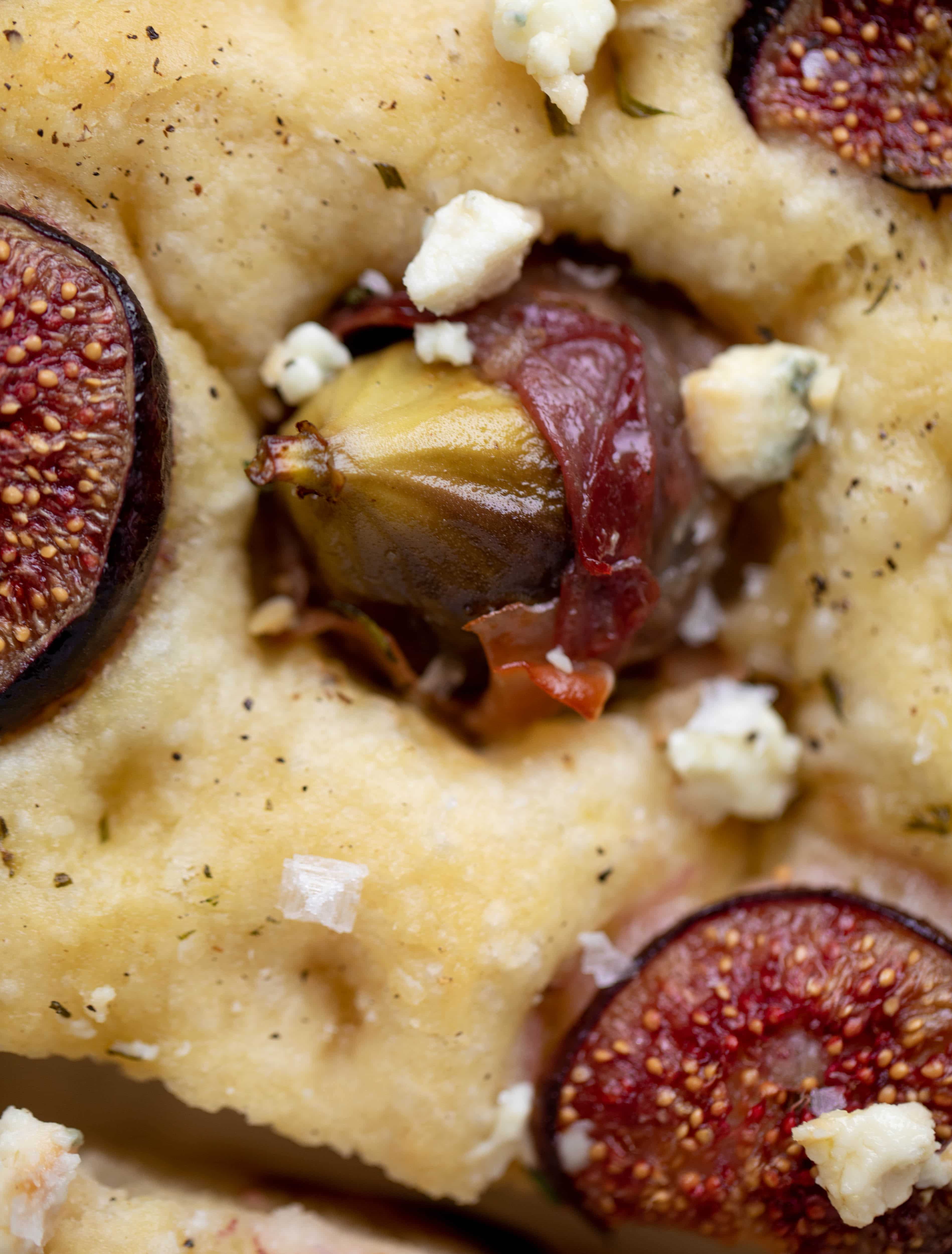 This stuffed fig focaccia bread is such an amazing way to use figs! Golden, toasty, salted focaccia studded with fig jewels. It’s delicious and pretty! 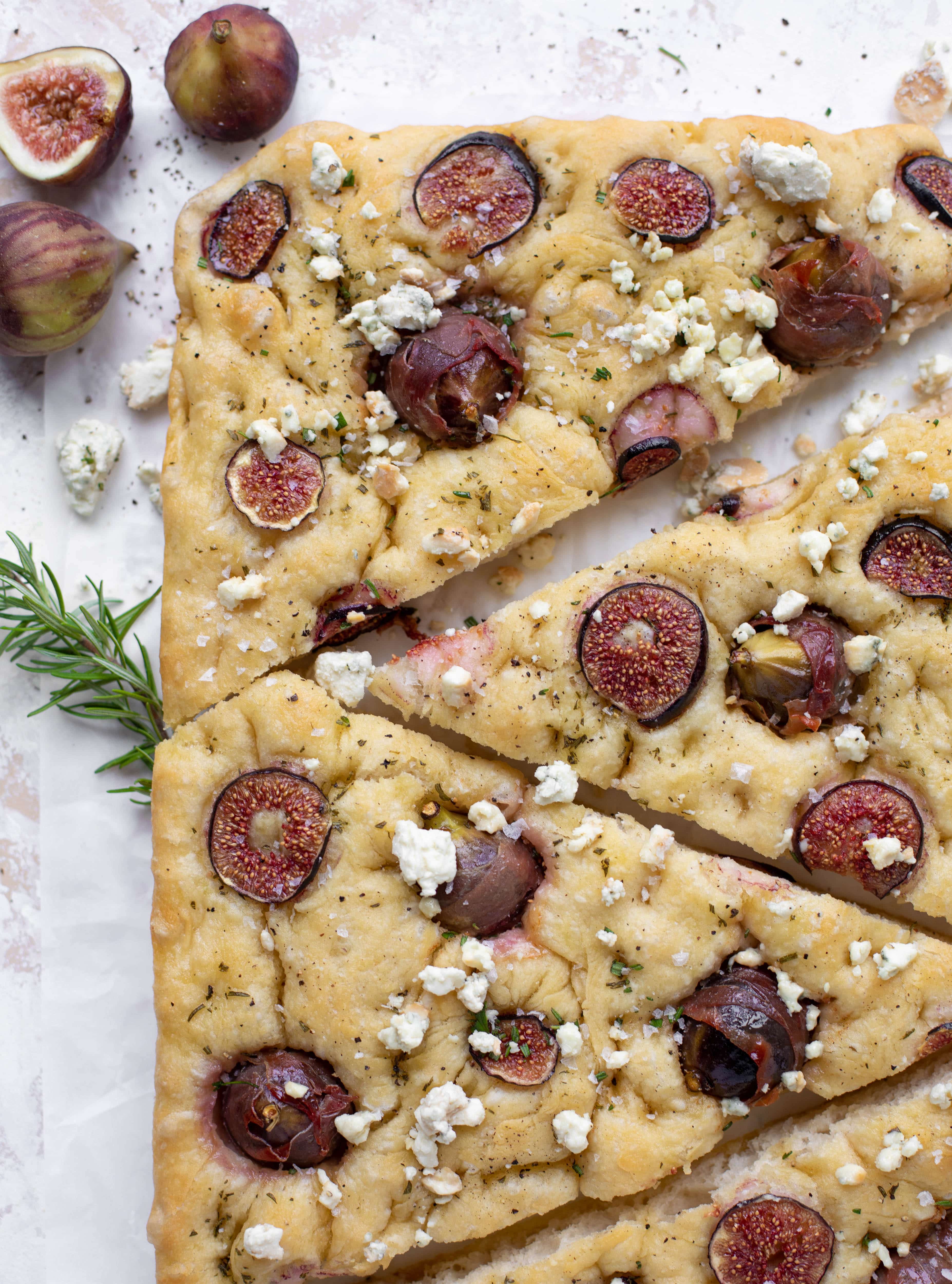 This is a ridic amount of flavor. Because figs. And cheese!