This pumpkin cream cold brew recipe, inspired by the new Starbucks drink, is made with your choice of iced coffee and the yummiest pumpkin spice foam — which is surprisingly simple to make homemade! 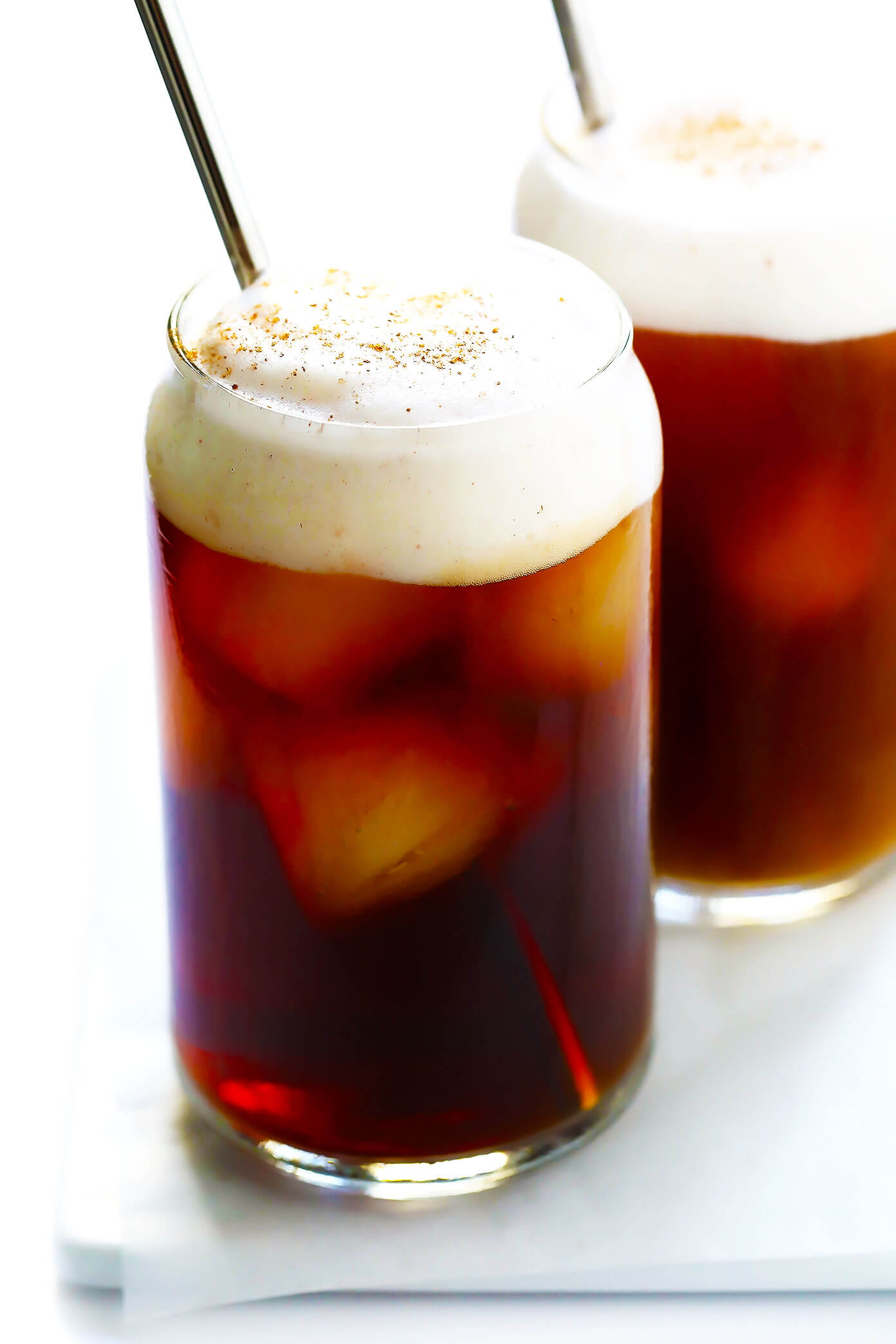 Well, fun news — Barclay (who worked as a barista back in the day!) and I have been tinkering around with a copycat version this past week, and I think that we’ve finally nailed it!

Turns out that the drink’s signature pumpkin foam is surprisingly easy to make in less than 5 minutes with just a few basic ingredients (milk, sweetener, vanilla, pumpkin purée, pumpkin pie spice and salt).  And of course, when making your own homemade pumpkin iced coffees, you have the added bonus of being able to mix and match your preferred brewing method, type of milk, and type (and amount!) of sweetener.  So whether you go the skim-milk-maple-syrup-iced-pour-over-coffee route like me, or maybe opt for an almond-milk-honey-nitro-iced-coffee combo, or just want to stay true to the original with a half-and-half-granulated-sugar-Starbucks-cold-brew — you get to call the shots with your coffee order here, and the the options for customizing are deliciously limitless.

I also have to say that I’m a huge fan of this drink because it is refreshingly not too sweet.  I actually make mine with even less sweetener than the Starbucks version (which is already has mercifully less sugary than its famous pumpkin spice latte cousin).  Yet my pumpkin cream cold brew still tastes just as refreshing and autumn-y and pumpkin-spice-y as ever.

I’m now convinced it’s the perfect drink for transitioning from summer into fall.  And let’s be real, conquering pumpkin foam at home is going to land you some major barista bragging rights. 😉

So round up these ingredients, and let’s make some pumpkin cream cold brew together! 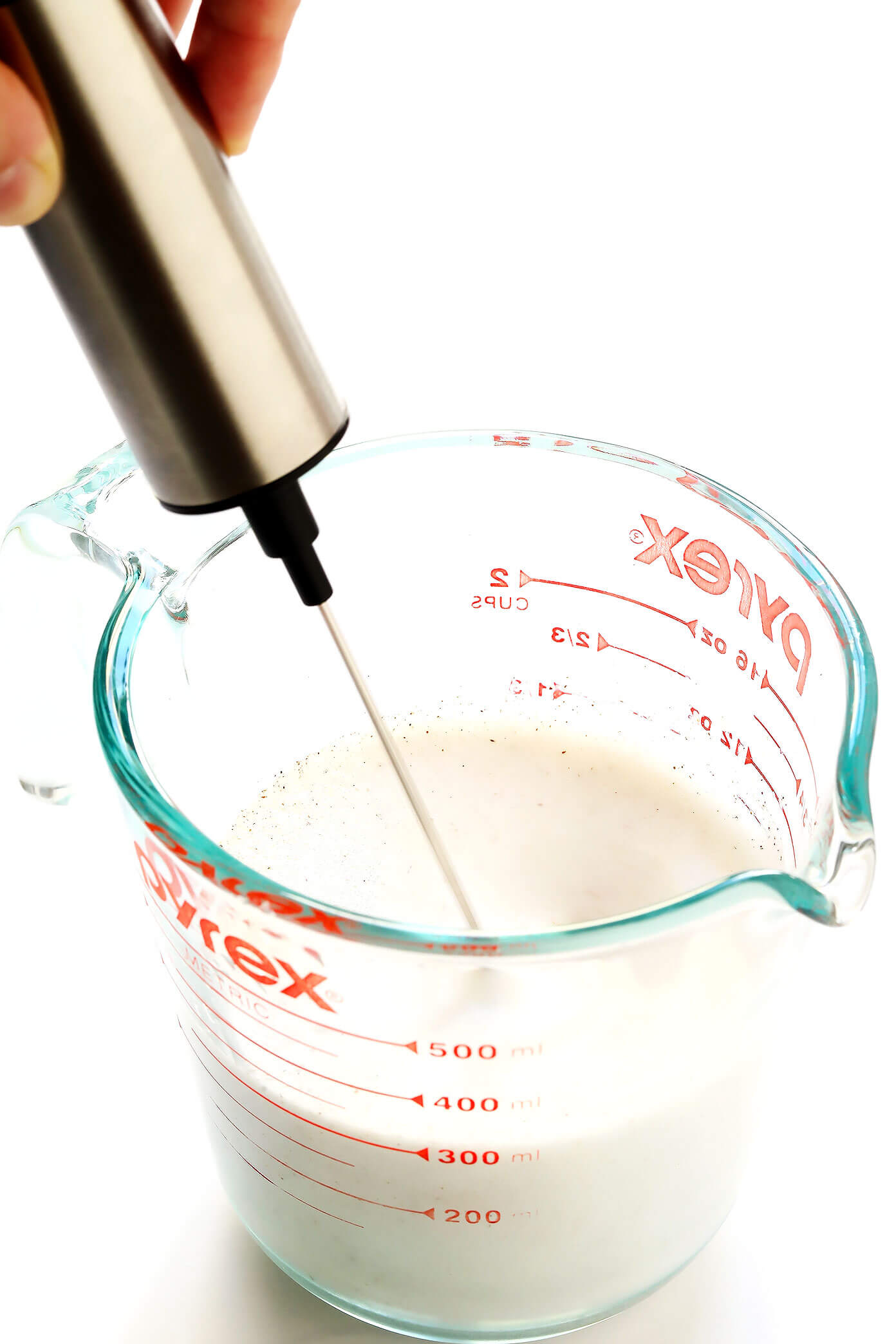 To make this pumpkin cream cold brew recipe, you will need (affiliate links included below)…

Ok, so I’m not usually one to encourage purchasing extra single-use kitchen gadgets.  But if you really want to nail your pumpkin foam game, it’s worth it to purchase a milk frother.  Some options:

Also, we kept things simple and just frothed our milk in a glass measuring cup.  But you’re welcome to use a steaming pitcher if you have one. 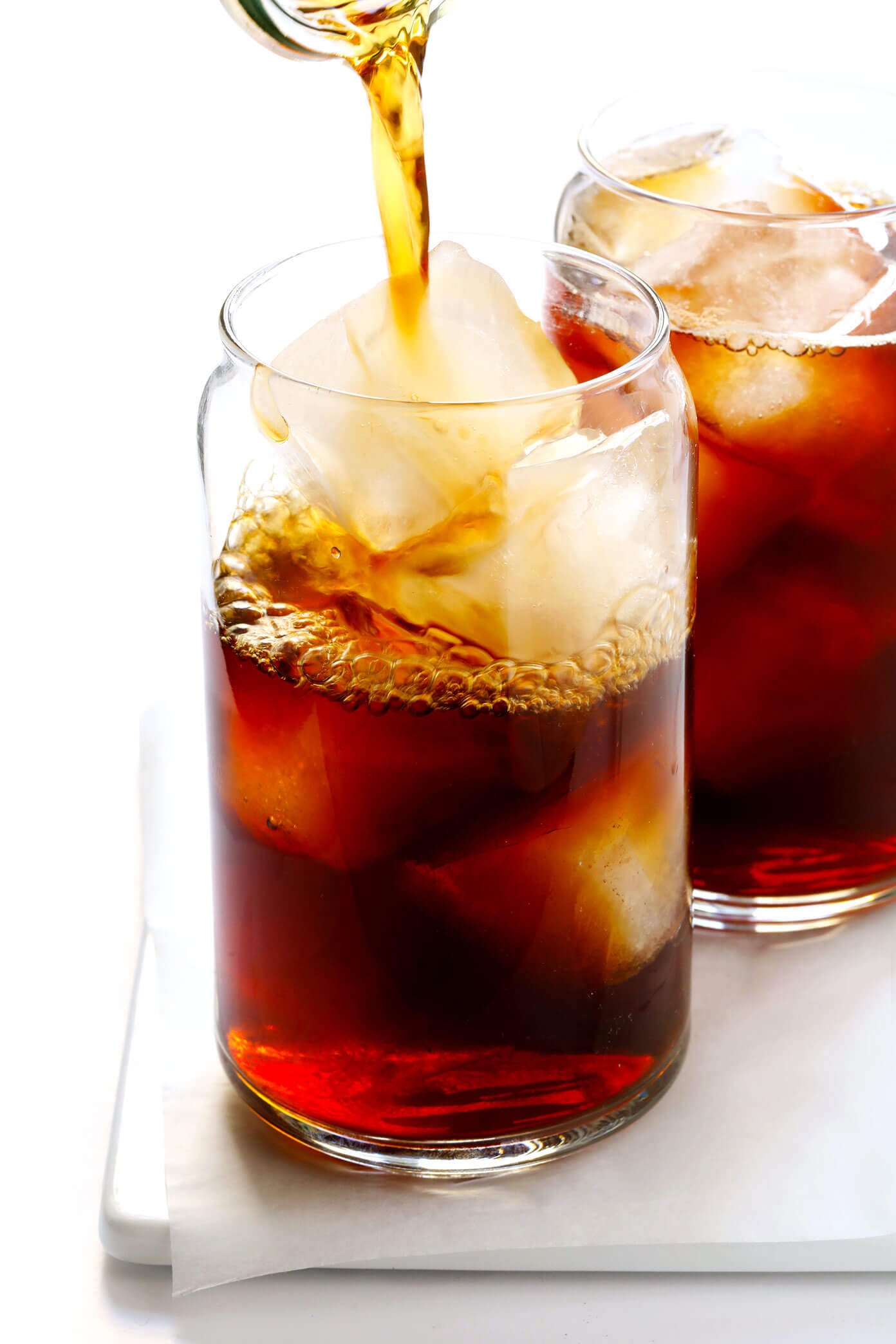 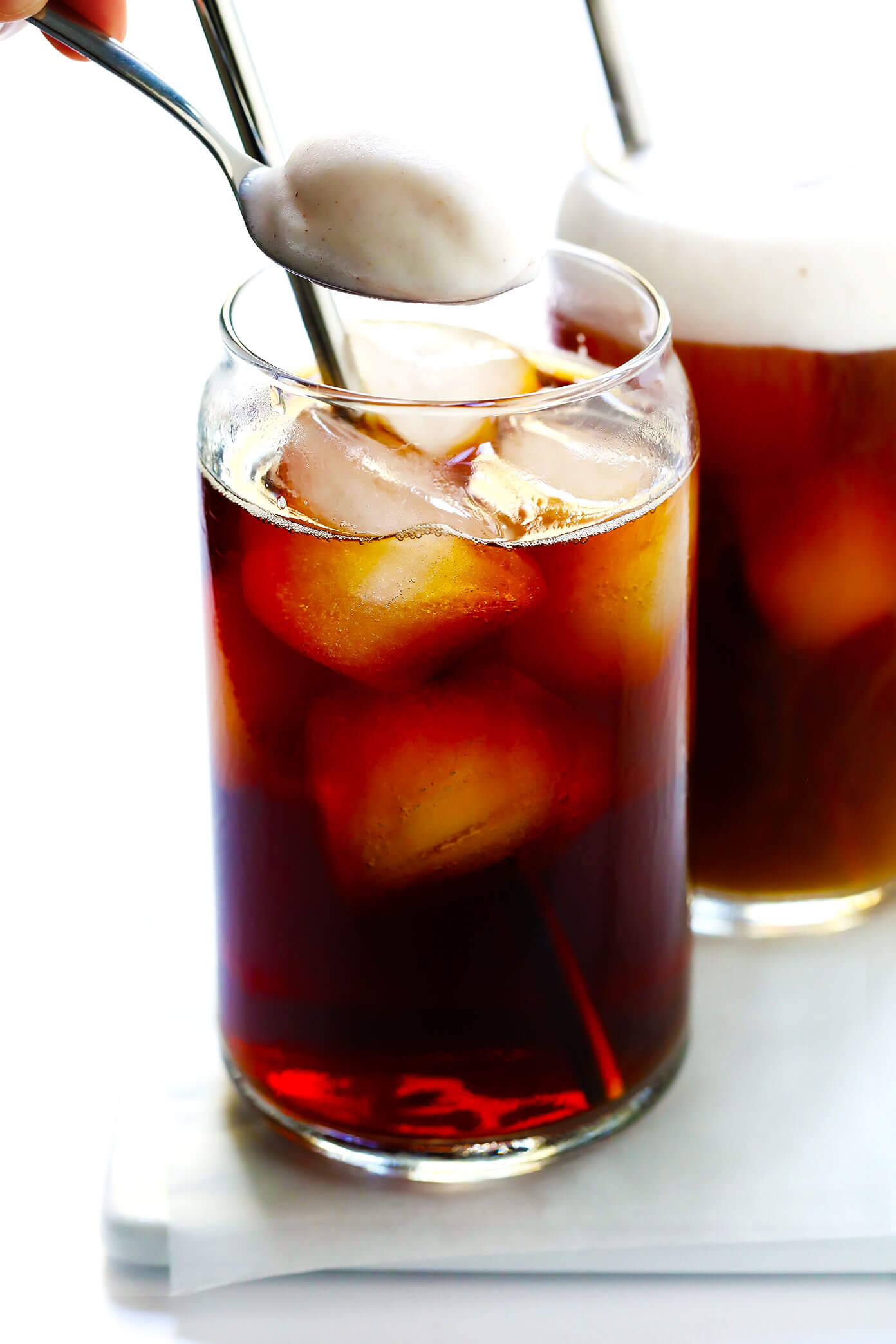 Does the type of milk affect the foam texture? Yes.  As I mentioned above, skim milk is the easiest milk to foam.  But we’ve had success with other types of cow’s milk (and half and half), almond milk and oat milk.  If using a non-dairy milk, I’d recommend trying a barista-blend (such as this one), which will foam up and hold its shape a bit better.

What to do if my pumpkin foam isn’t foaming? Basically, the more ingredients that you add to your pumpkin foam, the harder it will be to froth up into a stable foam.  This is why I recommend using minimal sweetener and just a smidge of pumpkin puree.  The temperature of the milk also makes a big difference here, so double check that your milk is fresh-outta-the-fridge cold when trying to froth it.  And if the mixture really isn’t frothing well, I recommend omitting the pumpkin puree entirely.

Can I make the pumpkin foam in advance? Nope, it’s best made just before serving.

Can I make this without the pumpkin foam?  Sure thing, just stir the foam ingredients into your iced coffee and they will still be delicious!

How long will the pumpkin foam last? Totally depends on what kind of milk you use, as well as how tightly you froth the foam.  Ours lasted at least a good half hour when made with skim milk, but the almond milk version melted much more quickly.

Where did you find these cute cold brew glasses? We purchased these ones from Crate & Barrel and love using them for cold brews (hehe, of all kinds). 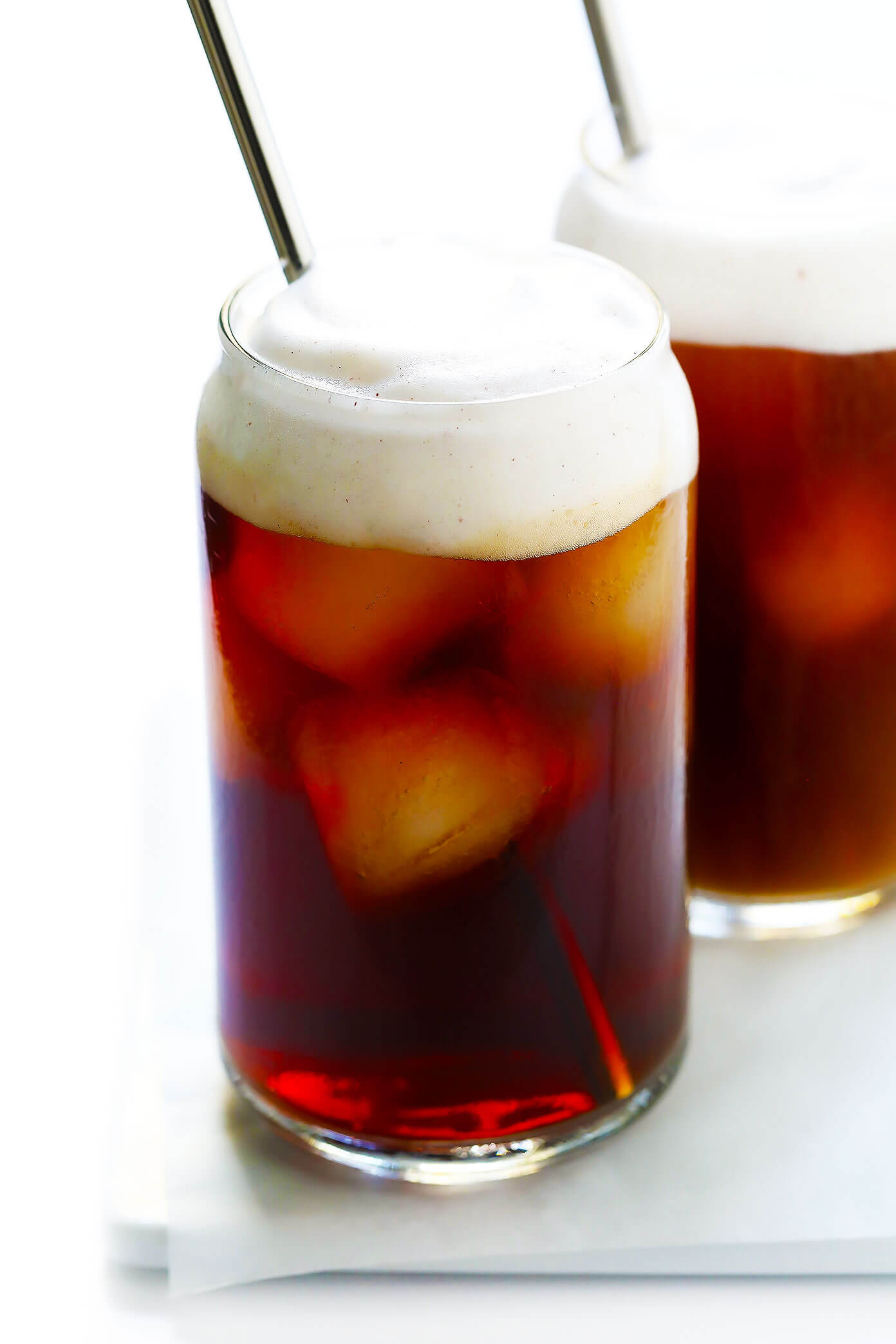 Looking for some more fun drink recipes to start your day?  Here are a few of my faves: 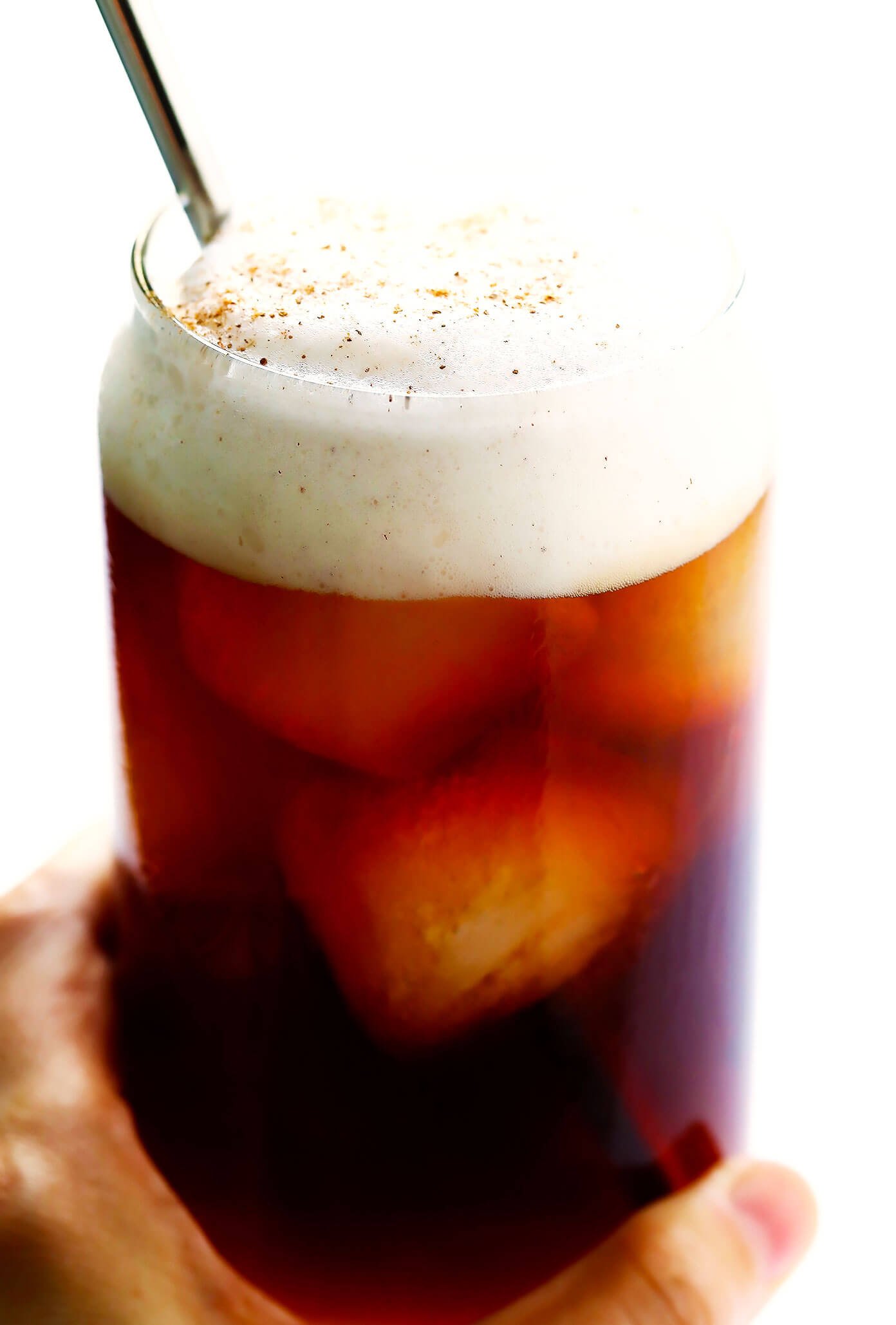 This pumpkin cream cold brew recipe, inspired by the new Starbucks drink, is made with your choice of iced coffee and the yummiest pumpkin spice foam — which is surprisingly simple to make homemade!

*Pumpkin pie spice: If you don’t have a jar of pumpkin pie spice (either homemade or store-bought) on hand, you’re welcome to just substitute straight ground cinnamon instead.

*How to create the foam with a handheld milk frother: For the first minute or so, I recommend holding the frother at a 45-degree angle, keeping half of the tip exposed and half submerged in the milk mixture, which will create a whirlpool with some large bubbles.  Then submerge the tip entirely until the foam at a 45-degree angle, and continue frothing the milk mixture until it reaches a tight, smooth consistency. 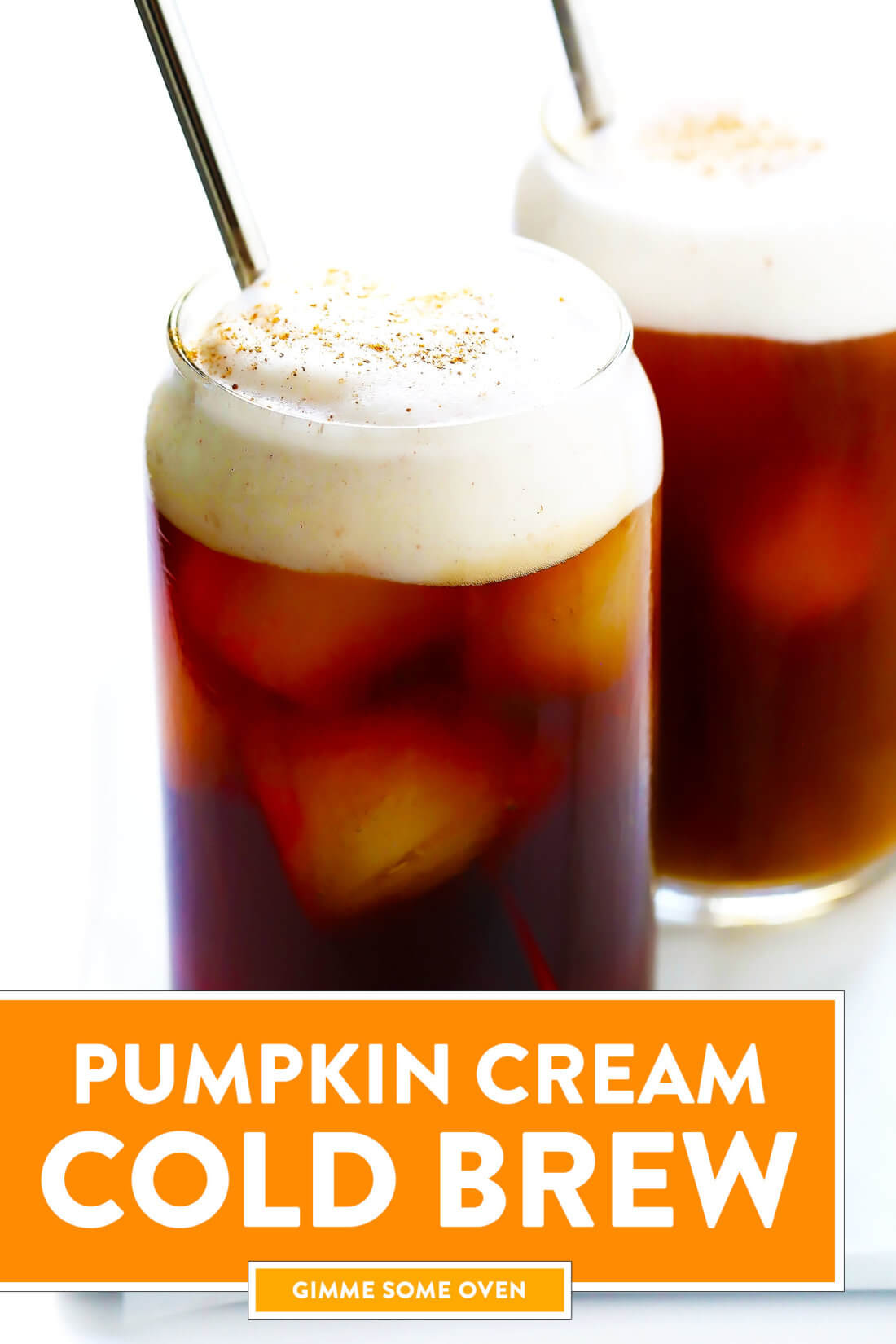