This super flavorful Butter Chicken that is better than any takeout and couldn’t be easier to make! It’s especially delicious served with a warm piece of naan!

Butter chicken is one of the best chicken recipes I’ve made to date. It’s right up there with Chicken Parm Meatballs and Chicken Tawook!

At it’s core, it’s cut up chicken thighs marinated in a lemon juice, yogurt (Stonyfield Grassfed Greek Quarts to be exact) and a spice mixture and then simmers in a savory sauce made of butter, onion, garlic, ginger, tomatoes and some cream. It’s slowly cooked until the chicken is almost falling apart, majorly tender, and packed full of flavor.

Any of the Greek Stonyfield (non-flavored) products would work for this recipe. But we’ve been buying the Grass-fed recently and we’re obsessed. Like all Stonyfield products, 100% Grassfed Greek is organic, non-GMO, and made without the use of artificial hormones.

Butter chicken is reminiscent to chicken tikka masala but the difference is that while Tikka Masala is a bit more complex and this tastes more buttery with a delicious tomato based Indian yogurt based gravy.

There’s all sorts of delicious juices that come with this recipe so you absolutely MUST eat it with a few pieces of homemade naan!

It’s a little reminiscent to a chicken tikka masala but the difference is that while Tikka Masala is a bit more complex and this tastes more buttery with a delicious Indian gravy. It originated in back in the 1950’s in India when some leftover chicken was tossed into a tomato based gravy sauce and it’s been popular ever since!

Why is it called Butter Chicken?

Because of the butter in the gravy of course!! If you’re hesitant about the butter, don’t be! It’s honestly so delicious in this recipe. You could also use Ghee if you have it on hand – will be just as delish!

What do you serve with Butter Chicken?

I like to serve a warmed piece of homemade naan with it. It’s also great over rice, quinoa, farro or any other grain.

What spices go in Butter Chicken?

Turmeric, garam masala, cumin, and cayenne are the traditional spices you’ll want to have on hand!

Can you freeze Butter Chicken?

You sure can! I freeze smaller portions of this all the time, once it’s fully cooked. In order to reheat it, I just remove it from the freezer, let it come to temp in the fridge and then transfer the mixture to a non-stick skillet and re-heat over medium heat. It’s a great dish to freeze because it re-heats so nicely! 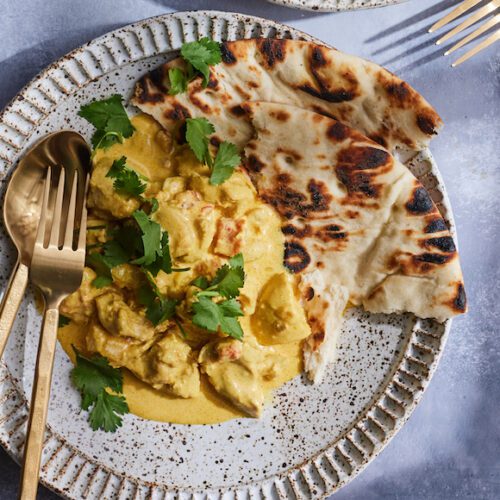 This super flavorful Butter Chicken rivals any takeout and couldn’t be easier to make!