I live for any sort of Enchilada and these Enfrijoladas are truly perfection! Rather than use enchilada sauce for dredging, you use a homemade black bean puree and WOW it’s spectacular!

Matt, Adam and I are constantly dreaming up new recipe ideas when we are all together. Every time we’re all in the studio, it’s like a giant mind meld. Recently Matt was telling us about Enfrijoladas and I was SHOCKED AND APPALLED I had never made them before. I remember having something similar when we were in Mexico City a few years ago and the concept is delish.

Enfrijoladas mimic that of a traditional enchilada but instead of using enchilada sauce, you use a bean puree. I added some chipotle peppers, garlic and salt to some cooked black beans to give it some extra kick and it’s so good, you could easily eat it on it’s own.

As far as fillings go, I did an easy shredded chicken and cheese situation here. But this is a recipe that you can easily adapt if you wanted to use chorizo, shredded beef, chopped carne asada, some leftover carnitas… the works. Skies the limit – and you’ll be ready for dinner in no time! 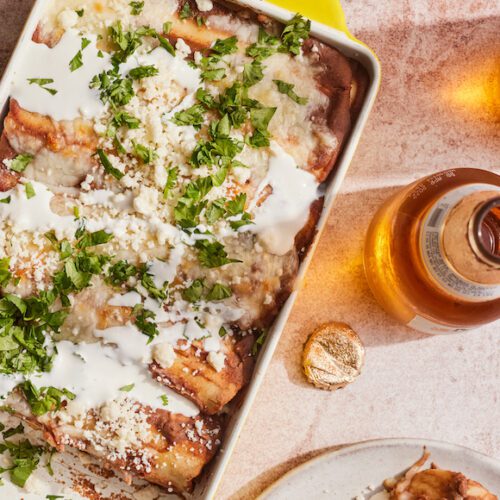 Imagine your favorite chicken enchiladas but instead of dredging them in enchilada sauce, you use a homemade black bean puree! It’s incredible.